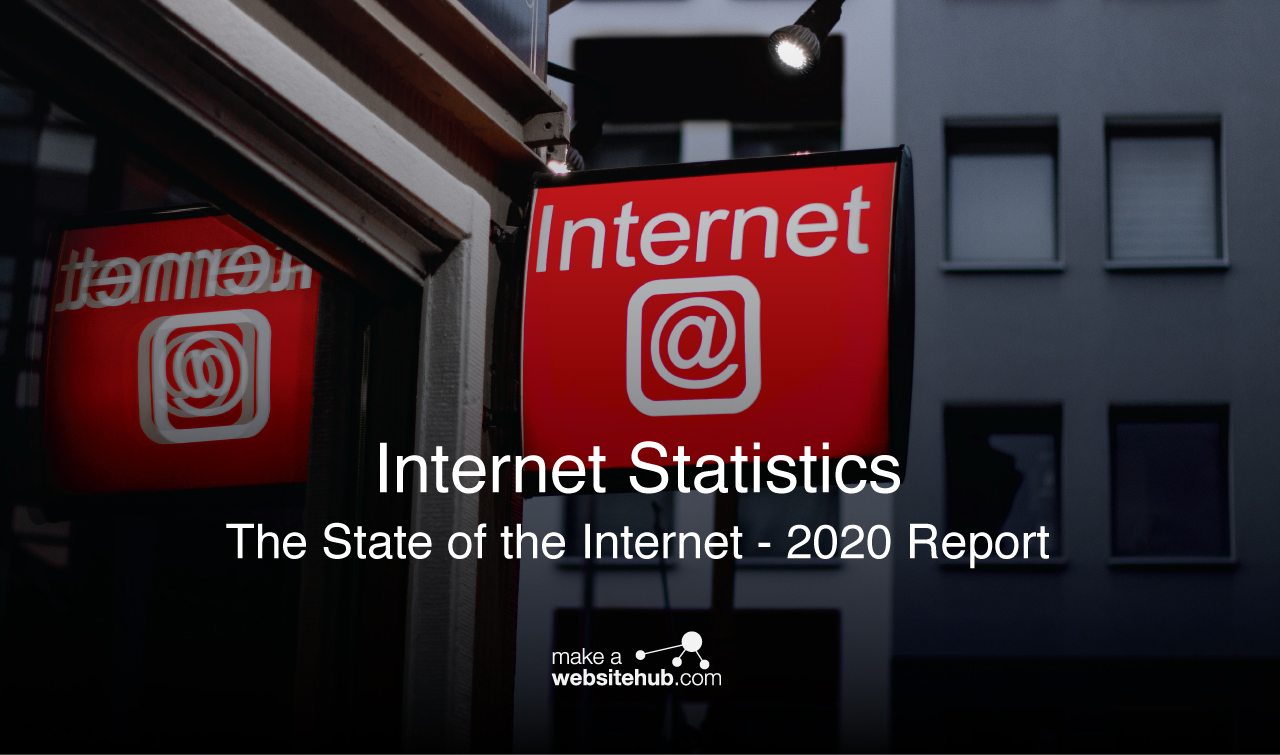 The internet is becoming an increasingly prevalent part of our day to day realities. I’m sure a lot of us end up spending more time communicating through screens than we do physically with people in our daily lives.

One thing is for certain, the internet and the role it plays in our lives is here to stay.

With the internet being just under 29 years old this year (the commercial internet was made publicly available in 1991), it’s amazing to see just how fast it’s become a necessity for our work, our leisure, our entertainment, and relationships.

Below we examine what the internet looks like today by exploring the latest internet statistics.

Note this post reflects the latest information, but will be updated as new statistics become available.

We’ll start with the big one–how many people use the internet?

This level of internet growth has been steady and shows no signs of slowing down. Imagine what this figure will be 10 years from now.

Let’s put this into perspective further–the world’s average population growth currently stands at around one percent, while the adoption of the internet is at 8.2 percent per year. Compare the current figure to the 3.7 billion internet users in 2017.

The internet didn’t hit 1 billion users until 2005, but it only took 6 more years for that number to double and reach 2 billion.

The region with the largest internet usage is Asia (they are home to the world’s largest population after all. Of the 4.54 billion internet users, nearly 2.4 billion are located in Asia.

The very first website was created in 1991 by British physicist Tim Berners-Lee. Since then the total number of websites created has soared exponentially.

Today there are nearly 1.8 billion websites live on the internet, and that number only continues to grow by the second.

However, not all these websites are being visited by humans…

The latest report in 2019 shows that over half of website traffic is bot traffic, and this number grows year after year.

Regarding domain name registration, GoDaddy hosts the largest majority of those domains, with over 17 percent of the domain registration market.

Here are some interesting facts about domain names and hosting:

How Much Time is Spent on the Internet?

Internet users across the world spend 6 hours and 42 minutes online every single day. This figure might seem like a lot, but we have to consider the multitude of devices a user has.

It’s no longer just desktop devices, it’s mobile phones, tablets, and even smart TV’s that are connected to the internet.

But, what exactly are people doing on the internet: surfing the web? Scrolling through social media? Watching streaming videos? Keep reading to find out.

What Do People Do on the Internet?

Here’s a breakdown of how people spend their time on the internet, the browsers they use, and what kind of devices they prefer.

The Most Popular Websites

What kind of websites are people viewing every day?

Here’s a list of the seven most visited sites across the world:

As you can see, the most popular sites are search engines, social media, and Wikipedia which can be classified as a reference site.

However, other types of sites are on the rise as well. For example, the online retail giant Amazon.com is the 14th most popular website in the world.

The most popular browser is Google Chrome, with a current market share of nearly 60 percent.

This is followed by Safari, then Internet Explorer & Edge, Firefox, and finally Opera.

The same goes for the mobile browser market. Google Chrome makes up over 60 percent of the worldwide market for mobile browser share. This is partly due to the popularity of the Android OS. Currently three of every four mobile phones on the market today run on Android.

The second most popular browser is Safari, which comes pre-installed on Apple devices. To extend the dominance of these two browsers even further, Chrome or Safari are used on 8 out of 10 mobile devices.

However, if we look at the US we see that Safari is leading the mobile browser wars at 52.3% of the market.

The Mobile-First Future is Here to Stay

For example, mobile is increasingly becoming the preferred way to use the internet. There are currently 4.1 billion mobile internet users, which means that just over half the world’s population accesses the internet via mobile devices.

Here are some interesting stats about the mobile arena:

Just as every other internet-related metric is increasing, so is the number of domain name registrations at domain registrars. Today there are over 350 million domain names currently registered.

From 2018 to 2019 domain names saw an increase of 4.4 percent across the board. However, the most popular domain name extensions being registered are .com and .net, as they make up nearly 40 percent of the total domain names registered.

Where Does the eCommerce Market Stand?

China dominates the list in having the largest eCommerce market. China alone is expected to bring in nearly $2 trillion in sales in the global eCommerce space this year, which accounts for 36.6% of the total market.

One thing is for sure, the eCommerce market is starting to take over, take a look at these stats:

However, if you’re running an eCommerce store there’s a lot you’ll need to think about to optimize for conversions:

There are over 3 billion people who use social media. With all these users, mobile devices are the preferred method for using these apps and networks, accounting for over 80% of the total time spent on social media.

However, the penetration of social media networks isn’t as widely distributed as overall internet access. However, adoption is increasing quickly in most regions of the world.

Social media penetration across Asian countries is higher than most due to the mobile-first connectivity of these markets.

But, what social media media apps are being used the most?

However, even though social media use is widespread, it has a different generational breakdown. The millennial generation continues to be the biggest users of social media, followed by generation X and finally the baby boomers.

Here are some interesting social media statistics to take home:

There’s nothing more important than keeping your website safe from prying eyes and other hackers. However, a lot of users don’t realize just how common hacking is.

Thousands of websites are hacked every day, and thousands of hacking attempts happen every minute. A lot of these attacks can be short too, with some only lasting less than 5 seconds.

The most commonly hacked CMS is WordPress, making up over 90% of all CMS hacking attempts.

However, a lot of this is due to its overall popularity. WordPress is the leading CMS in the world today and has a market share of almost 60% percent.

Here are some concerning stats about the current state of cybersecurity:

I don’t know about you, but those statistics make me want to double down on website security.

If you don’t know where to start check out this valuable resource.

We love our content streaming platforms the world over. Video consumption is on the rise and shows no signs of slowing down. Over 92% of internet users consume videos online every single month.

As we can see, YouTube is leading the charge. But, popular subscription based video services like Netflix, Hulu, and Amazon Prime Video are on the rise.

Here are some interesting stats about the current state of online video streaming:

We use search engines every day to help us access information, research, and learn new things. If you couldn’t have guessed it, Google is the undisputed leader of the search engines, making up over 73 percent of the global search engine market.

The rest of the market share is divided between Bing, Baidu, Yahoo!, DuckDuckGo, Yandex, and Ask.

If you couldn’t have guessed it, Google earns over 134 billion in revenue directly from online advertising.

In Closing: How Can These Statistics Help Your Website?

Hopefully, this deep dive into the current state of the internet has given you hope and excitement.

Whether you’re already running a successful website, or are just getting started online building your first blog, the potential for your next project is nearly endless. The internet and how we use it will continue to evolve.

If you’re not online already, then it’s time to make your first website today and start riding the technology wave.

Now that you’re well equipped to use the statistics above to sculpt your digital marketing strategy that takes advantage of the latest trends.