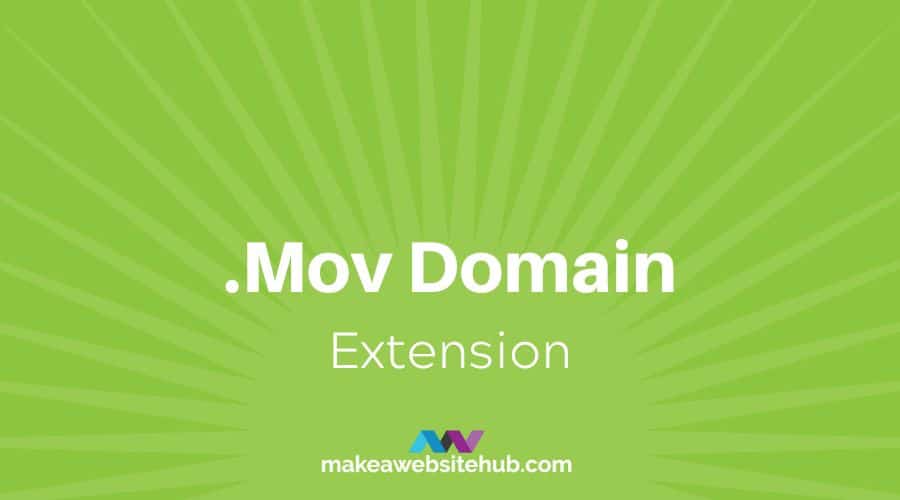 What is a .mov domain?

As a domain whose name is comprised of the first syllable of the word “movie,” .mov is intended to be used toward digital video ventures. Google’s, the company who applied for the ICANN domain, initial reasons for .mov’s existence were broadly framed around digital media- be it a site for a particular movie fan, sites promoting a given film or archival sites dedicated to the preservation of film content. One of the facts Google cited in its application was that in just a month of December during 2011, 85 percent of America’s online presence consumed nearly 44 billion videos.

Why choose a .mov domain extension?

As the defining section above indicates, a .mov domain is just the thing for a person, group or business with even a tangential connection to the film. Between the focus on movies and the scarcity of .mov sites, when compared to .net and .com sites, a site hosted on a .mov domain is already poised to show up sooner in search engine results.

Here is just a sample of the sorts of notable sites that someone could gain traffic with from a .mov domain site. As new domains are being bought every day, these names may or may not already have been acquired; they are merely examples in order to foster creativity in people interested in acquiring a .mov site.

“watchme.mov.” This site might be concerned with topics like:
1. Dance videos.
2. Animation tutorials.
3. Advice on how to improve traffic for a vlogger.

“grove.mov” might lead the owner’s traffic toward editorials on horticulture, victory gardens, and landscaping. Featured articles might cover subjects like explaining which crops are best suited for each season or highlighting the differences between dangerous garden pests and inoffensive ones. These articles could even host videos that go into additional detail for when text alone might be insufficient.

“dove.mov.” This particular site could be focused on at least two topics:
It might serve as a website focused on birds and also happens to capitalize on the closeness in sound between “dove” and “mov.” It might actually be dedicated to something pertaining to the Christian faith, likely focusing on film and television projects with a predominantly Christian focus or studio.

“spotsoothe.mov.” A site bearing this name could be dedicated to video tutorials of animal care, focusing on how to “soothe Spot”-handle an animal when it has to undergo a stressful activity like being taken along for a car trip, integrating a new pet into a home that already has pets, managing the fireworks that go off on days like New Year’s Eve and Independence Day and so on.

“theskiesabove.mov.” Such a website might dedicate its content to offering jaw-dropping videos and photos of meteorological phenomena. Examples of this sort of content could include lightning striking a waterspout, lava spreading over glaciers or photographic evidence of atypical precipitation-moments where an area was briefly deluged with frogs, fish and the like.

“polyester.mov.”
While the standard film is produced on polyester or acetate, having long since abandoned nitrate, this sort of domain could serve as a repository on the evolution of analog film development.

It might also belong to a site focused on the genre films of the 1970s-the era when polyester clothing was at peak popularity.
Another potential idea is that such a website would serve as a fan site for the 1981 cult film “Polyester” directed by John Waters and starring Divine.

Where can you buy a .mov domain name?

The .mov domain will be available soon, thanks to Google, after Google’s Charleston Road Registry applied to make it a valid TLD on August 30, 2014.

Anyone looking to purchase a .mov domain can look to reputable domain registrars like Namecheap, Godaddy, 101Domain.com, MrDomain, and Domain.com.