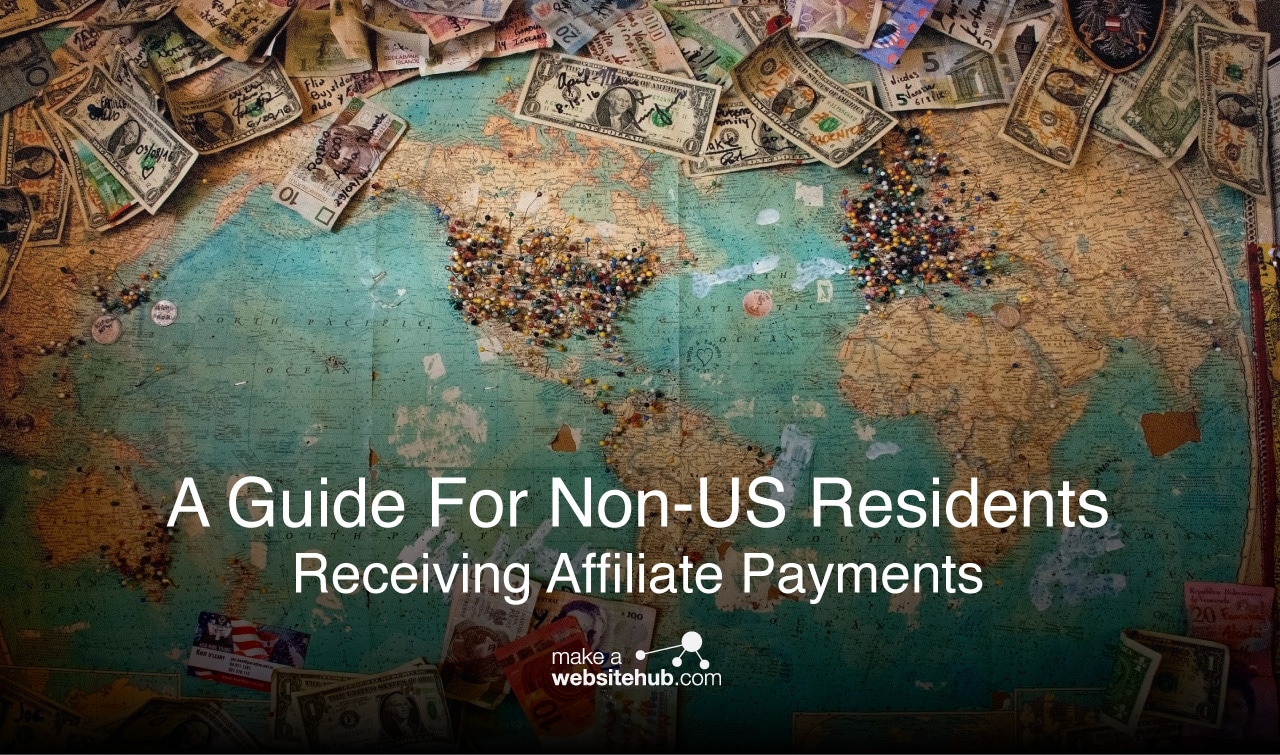 Below is our round-up of some of the best ways that non-US residents can use to get receive affiliate program payments.

Payoneer is one of the most popular money transfer services available for people around the world. If you’re getting paid by a company based in the US or EU, they can send “direct deposits” to your Payoneer account.

In the US, this system is called “ACH” while in the EU it’s referred to as a “SEPA transfer.” Either way, it will look to the company as if they’re sending money to a bank account that you own because your Payoneer account will include all the routing and other numbers needed to perform a direct bank transfer.

Note: Due to regulations in China, payments made in regular RMB (CNY) will be credited and held in CNH (offshore yuan) in your Payoneer account. You can then convert it to regular yuan (CNH) if you want to spend the money in mainland China. CNY converts to CNH at a 1:1 ratio.

You can set up a Payoneer account and connect it to your local bank account in 150 different countries (and currencies). After you get paid, you can send money to your local bank account (converting to the local currency, where applicable) for a fee or use a Payoneer card to withdraw cash from an ATM (cash point) just about anywhere in the world. The Payoneer cards can also be used in stores or online to make purchases directly.

Start by filling out your personal details.

Just about anyone in any country can open a Payoneer account.

Login in to your Payoneer account, and then go to “Receive”. Choose the option of either US or EU Payment Service.

Once you’ve done this you then need to open your affiliate accounts payment settings and then choose “Direct Deposit” and enter the Payoneer payment information.

Popular affiliate programs that can be used in conjunction with direct deposits into a Payoneer account include Amazon’s associate program, Clickbank, Walmart, Amazon, Target, and Shareasale.

Remember, if you’re based outside of the US, then you won’t be about to get direct deposits from Amazon.com. You can only be paid via a check or vouchers.

Transferwise offers another way for non-Americans to receive money. Transferwise lets you receive payments in or hold money in 40 different currencies:

Transferwise also lets you set up a “borderless” bank account that you can set up for free that holds money in US dollars, Australian dollars, Euros, or British pounds. Transferwise also issues Mastercard cards that can be used to withdraw money from ATMs around the world or to make purchases directly.

You can, however, receive payments in British pounds made via the Faster Payments scheme, including BACS and CHAPS payments. You just can’t get a direct deposit sent via SWIFT. Effectively, the company (or person) sending you money into your British pound Transferwise account must be sending the money from a bank account in the UK.

To transfer money from your Transferwise account to a local bank account, you can send it via a wire transfer. Transferwise charges currency-specific fees to do this which you can see at the link.

Affiliate programs that can be used in conjunction with direct deposits into a Transferwise account include Amazon’s associate program, Clickbank, Walmart, Target, and Shareasale.

Other Ways to Get Paid for Non-US Residents

Amazon affiliate programs in Europe offer payouts in gift certificates. They also have the option to receive a check made out in either British pounds or Euros. Amazon’s Brazilian affiliate program offers direct deposits into Brazilian bank accounts (in the local currency) as do the Amazon programs in Mexico, Australia, Japan, India, and China. If you live in one of these countries/areas, you might be better off setting up a non-US Amazon affiliate account.

Another option is to open a bank account locally that is denominated in U.S. dollars. If you’re receiving checks from Amazon or another affiliate program in US dollars, it’ll be easier and faster to deposit the checks if the money is going into a dollar-denominated account.

Skrill is another online money transfer service. It lets you receive money from international wire transfers that you can then send to your local bank account. But Skrill does not let you receive direct deposits sent via the ACH or SEPA systems, only international SWIFT payments.

You can also open a personal US bank account even if you’re not a resident, although the process is neither simple nor easy. Usually, you’ll need a Social Security Number (SSN), but Bank of America and TD Bank allow you to open a bank account if you’re not a resident. However, you will need to open the account in person at a bank branch in a state which allows non-residents to open bank accounts (laws vary from state to state). You’ll also need an address in the United States where you can receive mail.

In some cases, you may be able to get an ITIN or a tax number issued by the IRS for non-resident, non-citizens. With an ITIN number, you may be able to open a bank account in the United States quite easily although, again, you’ll likely need to do so in person. For more information about acquiring an ITIN, click here.

It’s also worth noting that some affiliate programs offer payment via PayPal. PayPal currently offers the ability to receive and send (received) money to a local bank account in more than 200 countries and regions.

For non-US residents, your ability to receive payments from an affiliate program is restricted by the payout methods offered. If the affiliate program has the option to send you money via PayPal or another service like Skrill that operates in your country, you’re all set. But for affiliate programs that only pay out via direct deposits (sometimes called “direct debits”) and by check, your options are much more limited.

Transferwise and Payoneer are the only two online money transfer services that function as “virtual” American bank accounts complete with all the routing numbers and other information needed to handle a domestic direct deposit (ACH in the United States). This allows non-US residents to receive money into what looks like an American bank account to Amazon and other American affiliate programs.

Other options for non-US residents include cashing US dollar-denominated checks into a local bank account denominated in US dollars, opening a US bank account in person (in certain locations) using an ITIN, and opening a corporate US bank account using an EIN number after incorporating a business in the United States (online or in person). Otherwise, you’ll have to accept payments in gift certificates or pay for an international wire transfer, where applicable.

Lastly, if you know someone whom you can trust who has an American SSN, you can ask them to open a bank account for you. Law firms also offer this service, but be aware that you’ll likely have to pay $2,000 or more to get started. With a law firm, you’ll simply be giving power-of-attorney to the law firm, so your access to the bank account will be protected. With a friend receiving money in their US bank account, you’ll have no control over the money, and the additional income in your friend’s name may have an adverse effect on their taxes.