If you want to learn an easy programming language, which is in high demand by employers, then you can do no wrong with Python. Knowledge of Python can potentially get you a gig at Intel, Amazon, Dell, Google, and LucasFilm (makers of Star Wars).

A lot of well known apps were made by Python. Examples include well-known favorites Instagram, YouTube, and Spotify. So it is a language with a lot of potential to make great things, and the fact that it is easy to learn is icing on the cake.

But you would be wrong in thinking that you need formal training in Python to be qualified. In fact, just perusing through a few website tutorials and perhaps an online course or two will help you to at the very least grasp the basics.

Oh and don’t forget The New Boston, which has a huge Python section.

Dive Into Python begins by reminding you that Python is already installed on some platforms such as Linux and Mac, and not on Windows. So whether or not you need to “install” it, depends entirely on what operating system you’re using.

Once you have Python up and running, the site then shows you the basic principles of the language, as well as some of the more familiar commands. Learn such terminology as Variables, Tuples, List Elements, and Referencing Variables. Then get more in-depth with Lamda functions, Sys.Modules, and XML Processing.

Pretty soon, you will start to see how the various elements of Python come together, and who knows? Before you know it, you will be building your first program.

Python.org is dedicated to teaching people how to code in the language. From Beginners Guides to Mailing Lists, this site tries to be your one-stop shop for learning, as well as mixing with like-minded individuals. Chat with Python fans on IRC channels and meet them at workshops and conferences, which are listed on the site.

The site has two Beginners Guides – one for programmers and one for non-programmers. You can also download sample code to play around with, and browse thousands of third-party modules in the Python Package Index. 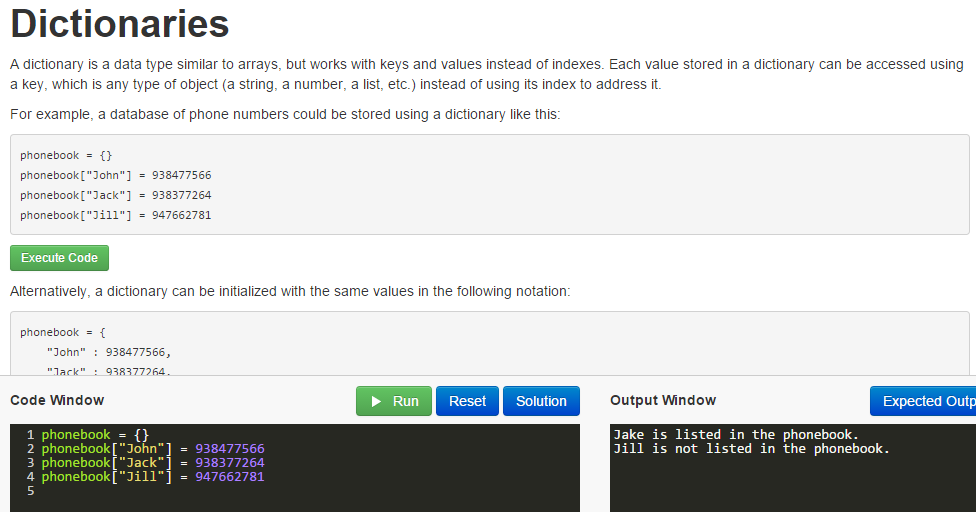 Made by the same people who made Learn Java Online, Learn Python follows the same design and principles. Two code windows are at the bottom of the screen (one to enter the code, and one to view the output). As you view each piece of code being discussed, you can press a button for that code to be transferred to the code window. Here you can run the code and see how it all works.

As always, the tutorials start with the old favorite “Hello World!” and then move onto weightier matters such as multiple function arguments and exception handling. What complicates matters though is that there are now two versions of Python – 2 & 3. The tutorials focus on Version 2, which is a bit inconvenient if you want to focus on Version 3.

Pygame is one for all the gamers out there. The site consists of Python modules for the SDL library, which enables you to write your own games. It is open-source so you can sell your games or give them away. Whatever you prefer.

What’s even better is that the app is cross-platform and is portable. This means no installation is necessary and you can carry it around on a USB stick.

To get started, just download the relevant package, install it, and then start browsing through the documentation. Don’t expect to be making games on your first day though. But the software and site are simple enough that you will be creating something soon enough. 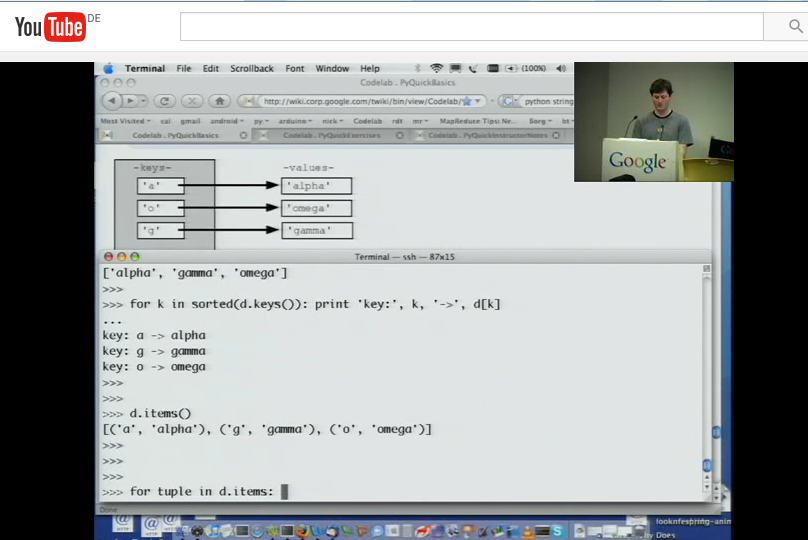 Since parts of Google are built using Python, it makes sense that the search engine giant would offer its own free class. And typical of Google, what they offer is nothing short of amazing.

The list of sections on the left-hand side of the page make it look as if this is a short course, with very thin meat on the bone. But in actual fact there is a lot of good information here which is easy to follow and should give you a good grounding in the Python language by the end.

What makes the Google class really good though are the lecture videos which are hosted on YouTube (naturally). Every section is accompanied by at least one video spanning an approximate 30 minutes each.

When you are feeling confident enough, you can then download the exercises to see if what you learned has stayed in. Exercises range from baby names to log puzzles.

Again, things are made slightly awkward by the fact that the tutorials are based on Python version 2. Google recommends that you ignore version 3 when doing their course.

If you in a dilemma about what language to learn, then Python should be your first port of call. It’s the one the big name employers seem to be looking for and it’s currently where all the big bucks are. Since it is so easy to learn, the learning curve is not so steep, therefore hopefully you will not be so easily deterred when you hit a stumbling block. Good luck!