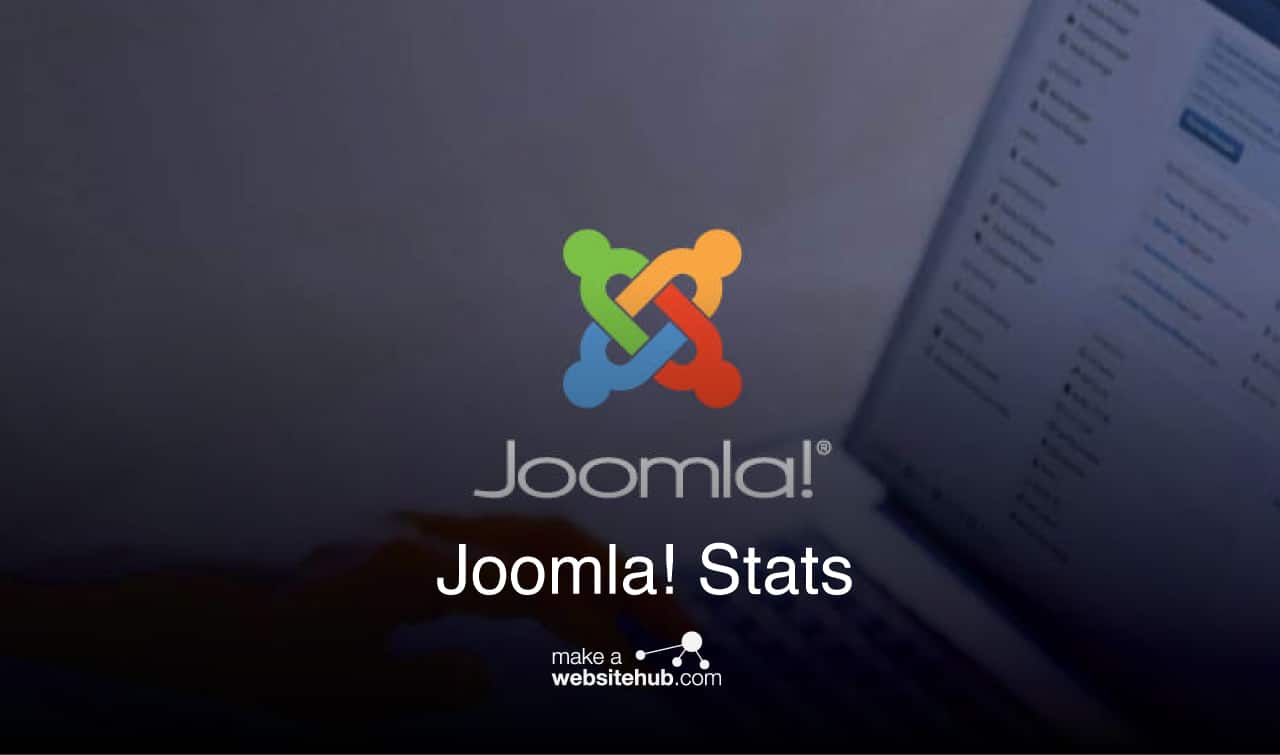 If you’ve chosen to use Joomla for your website, it’s only natural to want to learn more.

And whenever Joomla is concerned, there’s always something to be said or added.

In this article, we’ll briefly explain what Joomla is, who uses it, and what you get by using it. We’ll also share fun and useful Joomla statistics to inspire you to dig further.

Joomla (or better known as Joomla!) is an open-source, content management system (CMS) that helps you build your websites. It’s a free platform too, and it includes many extensions and templates to customize your website (or for those eager to have a unique site design, Joomla allows you to create your own template).

Available in more than 70 languages, Joomla tries to live up to the expectations of its clients across the world. It offers one-click installation for most hosting providers, and although it’s pretty easy to use it, it might prove to be somewhat difficult for absolute beginners.

That being said, there are many extensions and add-ons you can benefit from and install without needing any coding skills. You can do wonders for your website in only a few simple clicks and installations. Plus, Joomla has a lot of developers always working on improving it, so you should be fine using it.

Joomla can accommodate any type of website – an entry-level website, medium-sized website, an established business, and so on. So, whatever the line of business you’re currently in, Joomla can satisfy your site needs.

There’s always a lot to be said about any content management system and the way it functions, and although it seems they are all more or less the same, there are always differences in the number of websites using a specific CMS, how long it has been around, and other useful information.

Joomla isn’t an exception. Here’s what we think you should know about it:

● Joomla is the number one content management system for developing social networking sites.
● Each day more than 300 websites are built via Joomla (and up to 1.6 million active sites are built using Joomla).
● Joomla has more than 1000 free and paid templates and almost 8000 extensions.
● It has approximately 700,000 active members in its forum community.
● 9% of all business-related sites choose Joomla over other CMSs.
● On a monthly basis, Joomla websites receive more than 2TB of traffic.
● More than 85,000 of the companies that use Joomla have revenue of $1-10 million.
● Joomla has been chosen 10 times as an organization of the Google Summer Code Mentor.
● Joomla has a higher degree of security than WordPress (this is so because Joomla developers offer security extensions that tackle all vulnerabilities).
● Throughout 2018, Joomla’s worldwide community organized more than 35 significant events (this includes events that took place in countries such as Italy, Germany, Austria, Brazil, and the United States).

Joomla powers 4.1% of all the websites using a content management system (this is roughly 2.4% of all websites).

Plus, many users use a different version (we’ll cover all the Joomla versions in the next section, so it will be much clearer who has opted for what):

Version 3 seems to be the most widely used one (almost 73% of all clients tend to use this one). 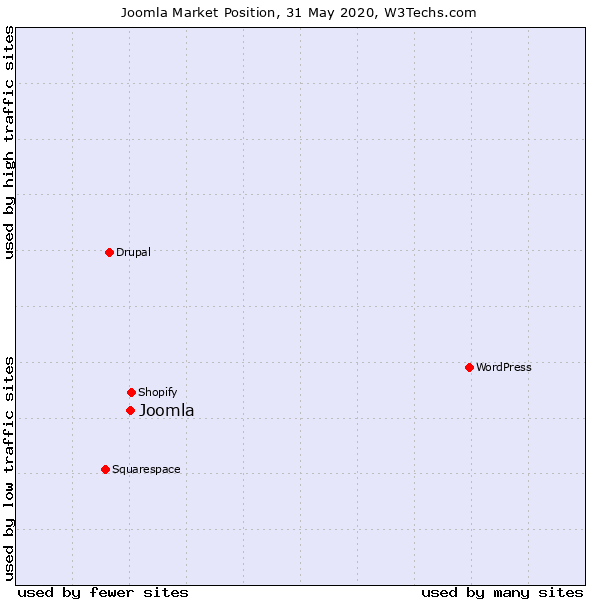 This diagram illustrates Joomla’s market position with a specific focus on popularity and traffic while comparing it to the rest of the content management systems.

So, those CMS’s placed in the lower right-hand side corner tend to be used by many sites (yet mostly by sites that have average traffic).

Joomla usage by websites across the globe
Source: SimilarTech

This map illustrates the countries where Joomla is being used the most. Based on the given information, Joomla seems to be the most popular in Russia, followed by the United States, and Germany (the top three countries).

Industry verticals where Joomla is being used
Source: SimilarTech

This pie chart clearly shows the industries where Joomla is being used as a content management system. Joomla is the least popular among health-related websites, and in turn, very popular in other areas (not listed in this pie chart).

However, to get a better idea of what businesses are using Joomla, let’s take a look at specific examples of websites running on Joomla: 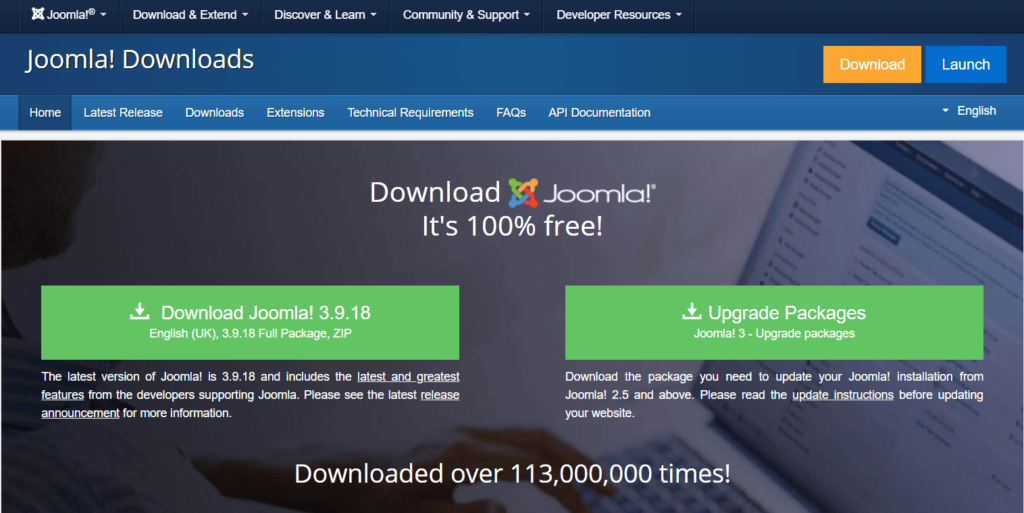 Like any other CMS, Joomla has released many versions. You can always find and download the latest one on their website (at the time of writing this article, Joomla’s latest version is 3.9.18, and it includes the most recent features from the developers working at making Joomla better).

However, we’d like to take a walk down memory lane, and go briefly through all of Joomla’s versions since its beginnings till now:

Joomla – a new kind of approach:
On April 25, 2014, it was announced that Joomla started following the Semantic Versioning Scheme for the upcoming Joomla versions. This means that the previous long-term support (LTS) and short-term support (STS) policies were no longer included.

Namely, the Joomla 3.3.1 version was the first version released with this strategy in mind. Here are the Joomla versions that followed:

As we can see, throughout the years Joomla has released many versions – all of them leading up to the final one. While the number of versions may not decrease, the changes each version comes with are much fewer. This is presumably so because Joomla believes it worked through most of its challenges (and potentially flaws), and thus it provides its users with its best features and operating system at this time.

Joomla Awards throughout the Years

Although awards aren’t always the only criterion that determines whether a particular content management system is trust-worthy and/or has a good reputation, they definitely provide a higher level of credibility.

Since being created back in 2005, Joomla has received many awards and recognitions. Here’s a list including most of them:

To sum up, Joomla is a fairly popular CMS, and while it may not be as popular as WordPress for blogging, it still has its advantages and benefits.

And taking into account that there are 4,263,122 websites using Joomla as their platform, our guess is that you won’t be making a mistake if you opt for it as well.