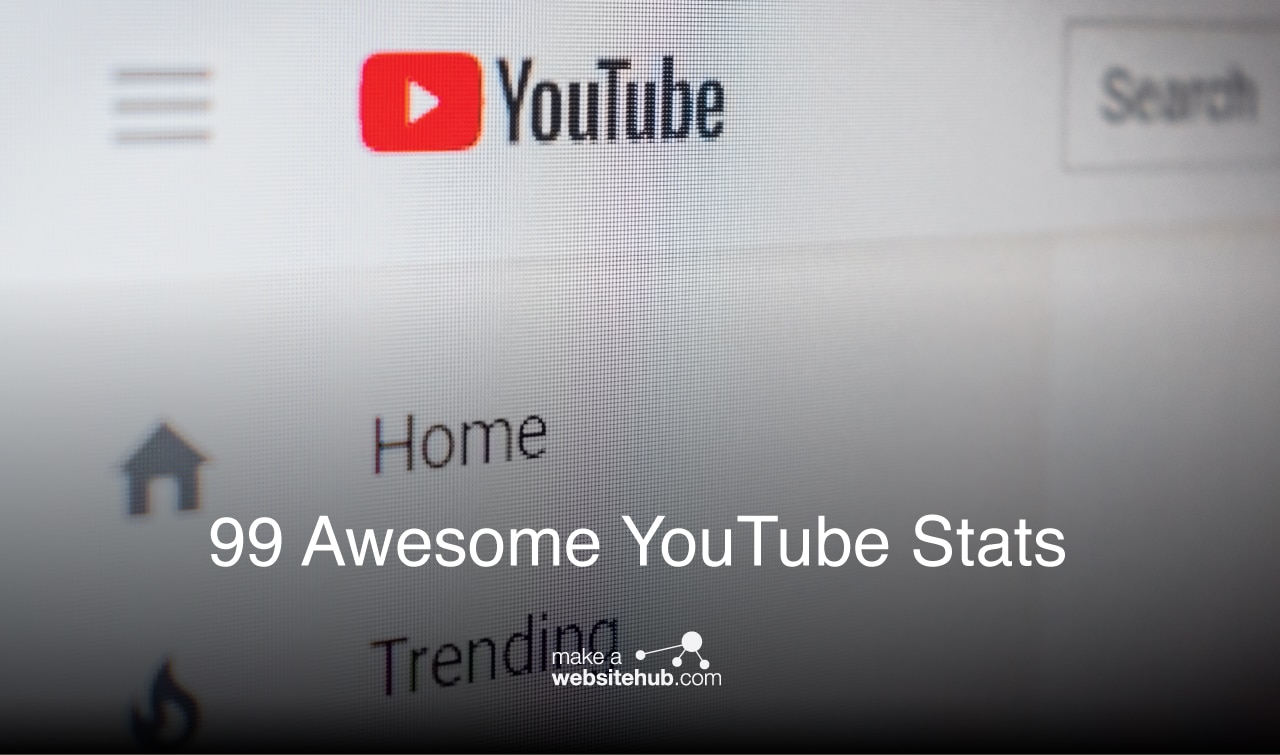 When YouTube launched way back in 2005, no one knew back then how many hours upon hours of YouTube videos we’d end up watching years down the road.

Apparently, everyone loves watching videos, so much so YouTube was experiencing over 100 million video views each and every day just one year after first making its way onto the Web. Not long after, Google bought the innovative online startup for more than $1 billion.

Years later, YouTube is now the second most popular website in the world. Its search engine is also one of the largest. In fact, next to Google, it is the largest.

So, what does this have to do with you? The answer is simple: you need to be on YouTube. As a marketer or business owner, building a YouTube presence can do wonders for your brand.

Not sure where to start? Check out these 99 YouTube stats to get an edge on the competition and set yourself up for success in 2021.

• The very first YouTube video, “Me at the Zoo,” was uploaded to the site two months later on April 23, 2005. The video shows one of the co-founders of YouTube at the San Diego Zoo.

• InVideo ads were launched a few months later in December 2007.

• YouTube reached two billion video views a day in May 2010.

• YouTube streamed the U.S. presidential debates for the very first time in 2012.

• Half of all viewers under the age of 32 won’t subscribe to cable, satellite, or another pay TV service by the year 2025.

• YouTube reaches more adults under 50 on mobile alone than any cable or broadcast TV network.

• Approximately 20 percent of viewers who begin watching a YouTube video leave after only 10 seconds. Needless to say, a great intro is a must!

• YouTube is available in 80 different languages, which covers nearly all internet users.

• Daniel Middleton, who is known to many as DanTDM, has made more money from YouTube than any other YouTuber. He made $16.5 million in 2017 alone.

• In Los Angeles, YouTube has a free collaborative space for YouTubers with 10,000+ subscribers. Here, anyone with a following can connect, learn from one another, and collaborate on videos and content.

• Behind Google, YouTube is the second largest search engine in the world.

• Collectively, people spend more than one billion hours watching YouTube each and every day and 46,000 years of video per year. This is more than Facebook and Netflix combined!

• 80 per cent of YouTube users live outside the U.S.

• The amount of time people spend watching YouTube videos is up 60 percent year over year.

• There are more than one billion mobile video views each day.

• With the advent of “Smart” TVs, the amount of time spent watching YouTube on TVs more than doubled in 2018.

• More than 50 percent of YouTube users use the site to figure out how to do new things, like quilt, trade options, or replace their car air filter.

• “How to” video searches are increasing by 70 percent year over year.

• 68 percent of YouTube users have watched a video to help decide on a purchasing decision.

• 80 percent of YouTube users who have watched a video prior to purchasing a product said they watched it at the start of the shopping process.

• The number one reason people watch YouTube is to feel relaxed. The second most popular reason is to feel entertained.

• The average watch time of slime playing, soap cutting, and other relaxation videos increased by 70 percent in 2018.

• The top four most popular YouTube categories are music, comedy, pop culture/entertainment, and “how to” videos.

• YouTube music videos are 95 percent more popular than other types of videos.

• 47 percent of all on-demand music streaming took place on YouTube.

• The youngest YouTube star is in second grade and has 18.2 million subscribers.

• The YouTube video with the record of receiving the most views in a 24-hour period belongs to the “Thank U, Next” music video by Ariana Grande. It achieved 55.4 million views in one day.

• Currently, the YouTube video with the most views is a music video named ‘Despacito” by Daddy Yankee and Luis Fonsi. The music video has been viewed nearly 5.9 billion times.

• “Despacito” also has more likes than any other YouTube video. In fact, it has received nearly 32 million likes, giving it an impressive like percentage of 89.25 percent.

• Conversely, the most disliked YouTube video is YouTube’s very own “YouTube Rewind 2018.” The video has been disliked more than 16 million times, giving it a dislike percentage of 86.53 percent.

• “Despacito” reached one billion views in only 97 days. The previous record was held by “Gangnam Style,” which took five months to reach the same number of views.

• “Despacito” is the most searched term on YouTube. It’s followed by “bts.”

• Prior to “Despacito,” “Gangnam Style” had such a massive surge in popularity that the video view counter actually broke! It’s obviously been fixed since.

• The most viewed non-music video is “Masha and the Bear – Recipe for Disaster.” This was the 17th episode in the series, and it currently has more than three billion views.

• In order of popularity, the YouTube channels with the most views are PewDieDie, T-Series, and 5-Minute Crafts.

• Nine percent of all small businesses in the U.S. use YouTube.

• Since 2016, there has been a 100 percent increase in the number of small to medium-sized businesses who advertise to YouTube viewers.

• YouTube makes up 2/3 of all premium online video watched by millennials across all devices.

• Since 2007, YouTube has paid out more than $2 billion to shareholders.

• The number of YouTube channels earning $100,000+ each year has increased by 40 percent year over year.

• With over six billion views, LEGO is currently the most popular branded YouTube channel.

• Viewers who watch TrueView ads to completion are 23 times more likely to subscribe or visit a branded YouTube channel, watch more videos by the brand, or share the video with others.

• Viewers who only watch snippets of TrueView ads rather than watching them to completion are 10 times more likely to perform one of the above actions.

• Brands who use TrueView see a 500 percent increase in new video views after posting new content.

• In 2018, music videos accounted for 95 percent of YouTube’s most watched videos.

• According to Interbrand, its Top 100 Brands collectively upload a YouTube video every 18 minutes.

• On average, these same brands operate multiple channels – 2.4 channels to be exact.

• YouTube’s annual revenue from mobile is up 100 percent year over year.

• In an average week, more adults under the age of 50 watch YouTube on their mobile devices more than any cable or network TV channel.

• More than 70 percent of all of the time spent on YouTube is done via mobile devices.

• 75 percent of all adults watch YouTube on a mobile device.

• The odds of a YouTube mobile ad capturing a viewer’s attention are 84 percent higher than with TV ads.

• In the past two years alone, people have watched more than 50,000 years worth of product review videos.

• 62 percent of YouTube users are male and 38 percent are female.

• Over half of all internet users in the U.S. over 74 years of age watch YouTube videos.

• 70 percent of millennials have watched YouTube videos in order to learn about something or how to do something new.

• 59 percent of people 16-24 years old are watching videos on YouTube more today than they were a year ago.

• 46 percent of people 25-34 years old are watching videos on YouTube more today than they were a year ago.

• Nearly 16 percent of all YouTube viewers are from the U.S.

• The majority of YouTube viewers come from the U.S., Russia, India, China, and Japan.

Check out my guides on:

• Since 2017, there has been a 75 percent increase in the number of YouTube channels with one million plus subscribers.

• Since 2017, there has been a 50 percent increase in the number of YouTubers earning at least five figures per year.

• With 85 million subscribers, PewDiePie is YouTube’s most popular channel.

• Sequoia Capital only invested $11.5 million into launching YouTube in November 2005. Google bought YouTube for $1.65 billion a year later in November 2006.

• Google generates an annual revenue of $4,000,000,000 from YouTube, which represents six percent of the internet giant’s total ad sales revenue.

• The top highest paid YouTubers earned $127 million combined in 2017. Two years earlier in 2015, the top YouTube stars only earned $54.5 million combined, so this is a huge leap.

• Dan Middleton, AKA DanTDM, is the highest paid YouTuber. His annual income reached $16.5 million in 2017.

• 40 percent more advertisers are running YouTube video ads each and every year, and the average advertiser in YouTube’s Top 100 has increased its spend by 60 percent year over year.

These stats are crazy, right!? Whether you’re a regular YouTube viewer just curious about the numbers and power of this revolutionary online video platform, or you’re a marketer trying to put together your video game plan, we hope these stats have opened your eyes to the amazing, mind-boggling reach of YouTube.

Now, get back to creating those awesome videos! However, before you do, have a look around our site to see how we may be able to help you crush it on YouTube and online in general in 2020.