Delivering Inspirational and Strategic Podcasts That Ignite Your Entrepreneurial Journey

Podcasting is growing as 32 percent of Americans or about 90 million people listen to podcasts every month. That number represents over 23 percent growth in 2019 alone and nearly 300 percent growth in ten years.

And hundreds of other options. 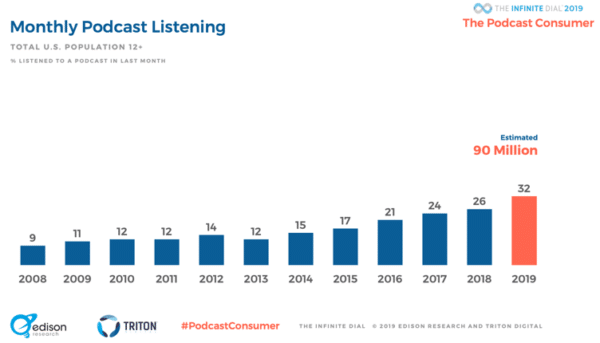 You may want to launch an exclusive postcast or add podcasting to your existing business. Either way, you’ll start from doing your research to strategically carving a niche for yourself.

Even with its low barrier-to-entry and low start-up cost, podcasting, like any other online venture, requires that you are solving a problem.

I had  a discussion with John Lee Dumas, founder of Entrepreneurs On Fire. We spoke about the underpinning principles of running both a successful podcast and an online business.

After interviewing thousands of successful entrepreneurs. John Lee Dumas strongly maintains that aspiring podcasters and business owners should look to create something different and unique. They should not be a watered-down version of the same thing everybody is doing.

The riches, he said, are in the niches. That’s exactly how he started his podcast and grew it to more than 85 million listeners monthly. Listen by listen.

JLD almost doesn’t need an introduction. Podcasting as we know it today owes its growth, in part, to John Lee Dumas’s success with this content channel.

Back in the day when no one had a daily podcast, John Lee Dumas launched his daily show and built an audience of millions of listeners. I like to think that JLD’s success has something to do with his background in the military. 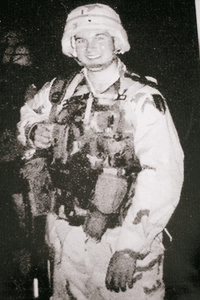 For more than eight years, JLD served in the military and was in Iraq for 13 months. After trying out many career paths, JLD found his passion in hosting entrepreneurs and other successful people on a podcast he called Entrepreneurs On Fire, or EoFire for short. 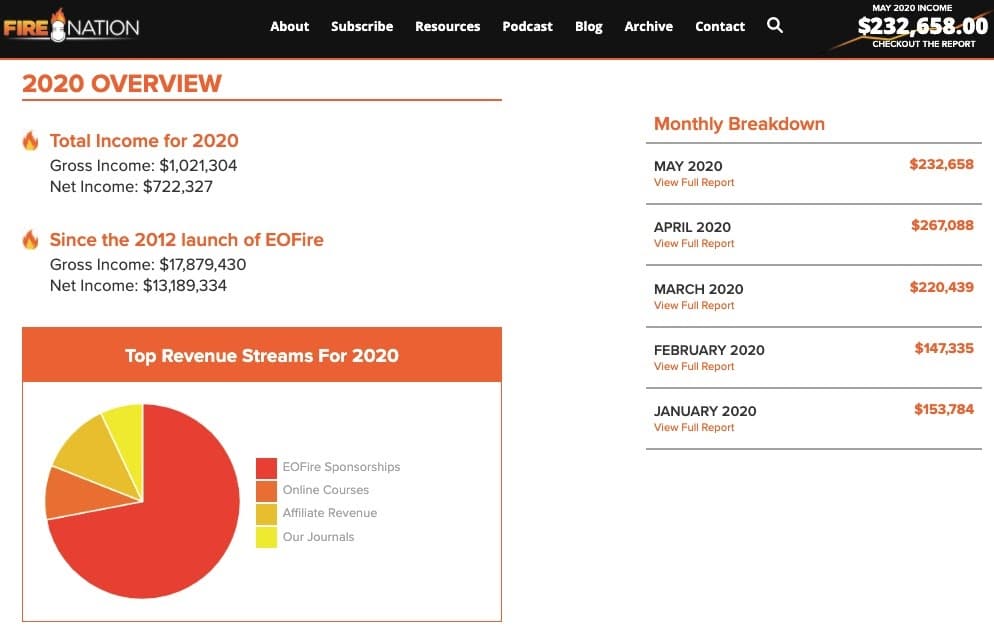 JLD founded EoFire on September 22, 2012, and by December 2013 — 15 months later — he had his first $100,000-a-month income from the venture. His business now makes millions of dollars every year and he publishes his income report on his site.

My Conversation with John Lee Dumas 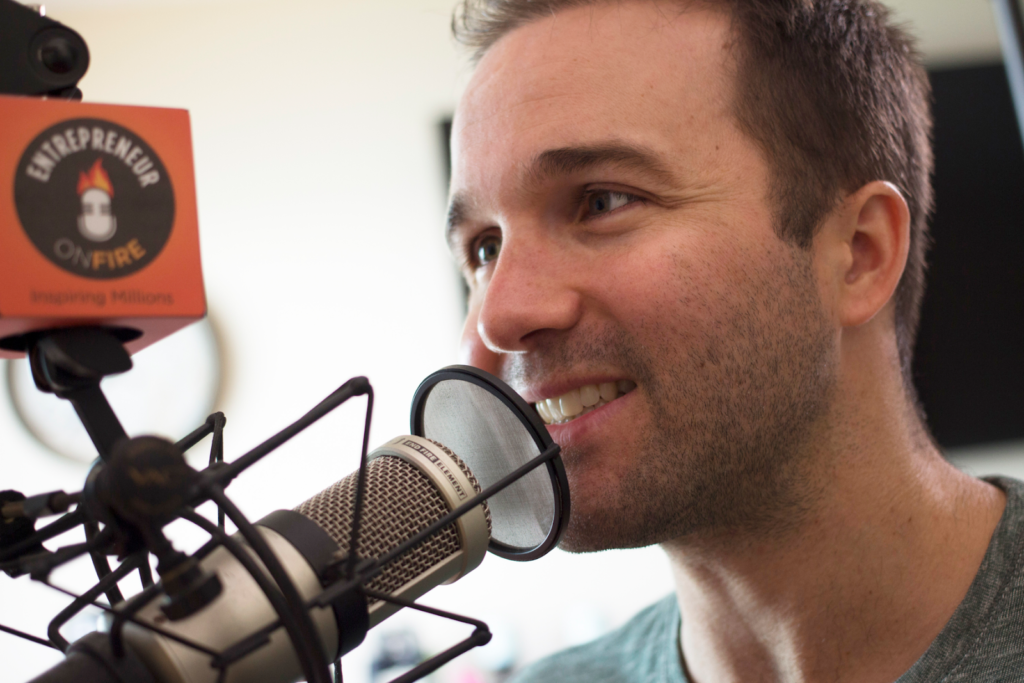 1. You’ve interviewed Tony Robbins, Seth Godin, Gary Vaynerchuk, and more than 2,500 entrepreneurs. Why do they care and want to talk to you?

Well, I’ve built an audience. I’ve built a platform, I’ve built a number of dedicated listeners that know, like, and trust me as a host. And so when individuals like those that you mentioned come on my show, they’re speaking to a large audience.

They’re speaking to a large listener base so they can share their message, their mission, and their voice with the world. And at the end of the day, that’s exactly what these individuals want to do. And I give them the platform to do it. 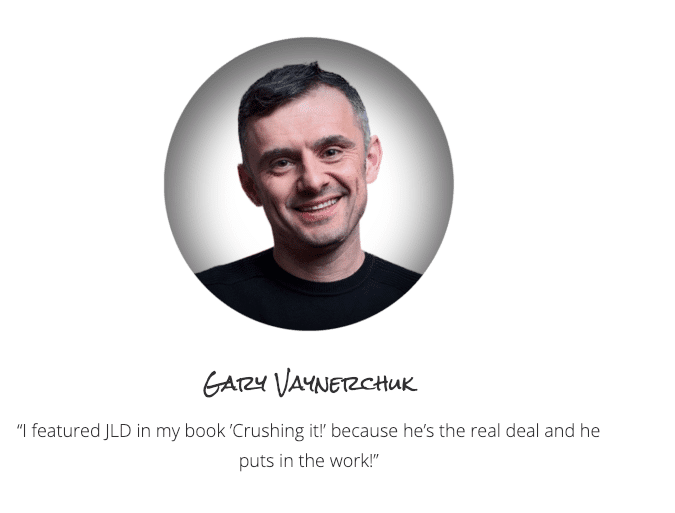 2. Before you had an audience, why did your first interviewees want to talk to you?

Back in 2012 I created the first-ever daily show interviewing successful entrepreneurs. I was different. I was unique. I was the first to market with that product, with that service, with that podcast. Because of that, I was able to get people to say yes because they had never seen it before. It was new. It was revolutionary and revolutionary moves markets.

The daily version of it? There was no podcast out there that was delivering a daily podcast, interviewing successful entrepreneurs. Every show was once a week, twice a month.

No shows had the audacity, had the courage, had the bravery to do it seven days a week. 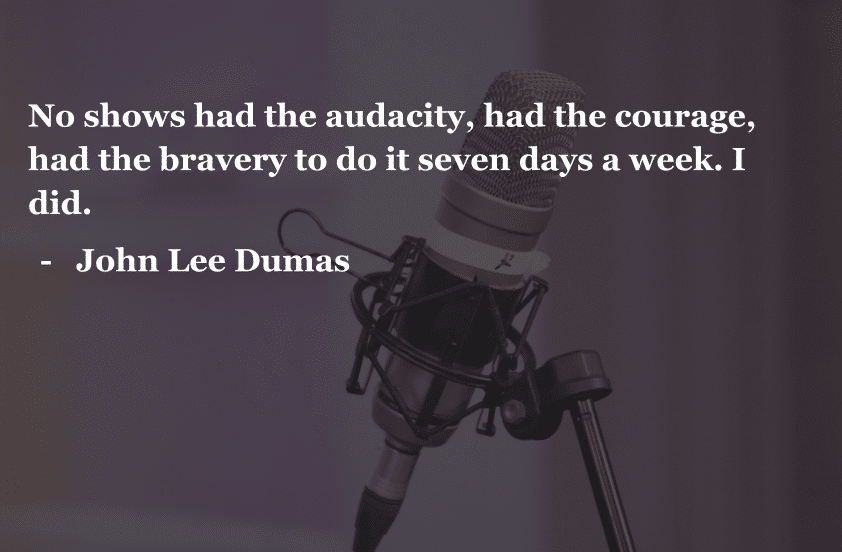 4. What qualities do you look out for in the entrepreneurs you choose to interview?

If they fit one, two, or all three of those categories, I’m going to look and say, “Hey, what could they specifically deliver value-wise to my audience? What topics can they share? What title would their podcast look like?” And then based on that, I make my decisions. 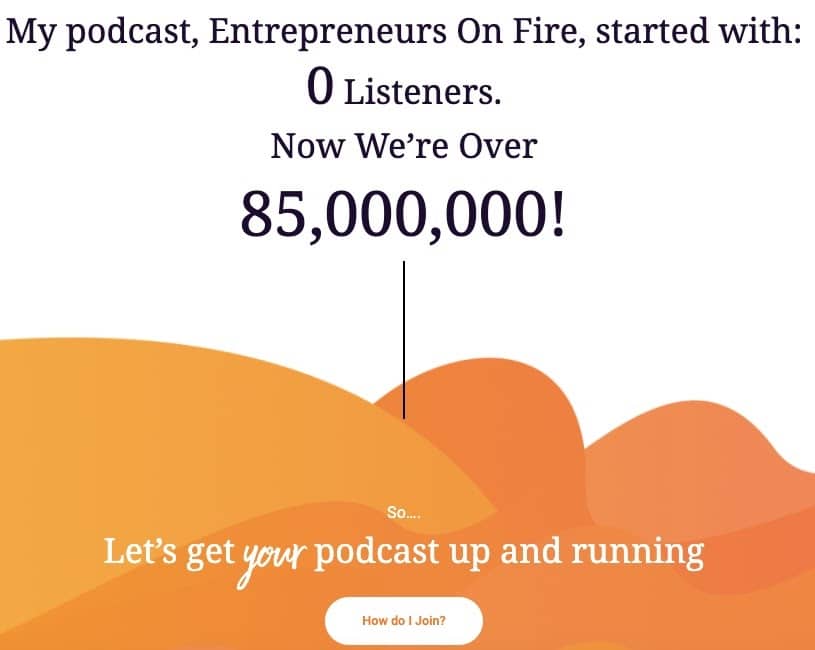 5. What was most responsible for growing your podcast traffic and audience, especially in the early days?

For one reason? Like you just mentioned, it was daily. It was different. It was unique. So people needed content on a day to day basis because they were driving to work seven days a week, they’re hitting the gym, they’re walking their dog, they needed more content. Entrepreneurs on fire.

The podcast filled the void that existed in the marketplace. And when you as an entrepreneur can first identify a void and then fill that void with quality content, the listeners will come, the audience will come, the customers will come. 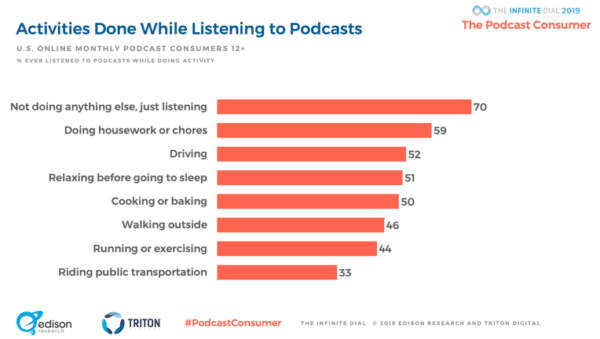 6. What are the podcasting trends right now? What do you think the future will be like for people just coming in now?

The trend right now is don’t do a podcast like everybody else. Don’t just jump on Skype and ask the same questions to the same entrepreneurs every single time and then release a watered-down version of every other show.

That’s how you create a shell. Those absolute riches are in the niches. And you’ve got to get down there and dominate.

If you just try to launch a show, interviewing successful entrepreneurs, guess what? You and a hundred thousand other people are doing the exact same thing, and then you’re all wondering why are we not getting traction? Because you’re the same. You’re not different.

You’re in a saturated market. You have to be different.

7. What do you think new podcasters can do to think differently?

So if you’re getting into podcasting now, you have to look at the space and you have to see it yourself. What is not currently being served as a market? And guess what? This isn’t going to take a glance or just a quick little stroll through the podcasting space.

This is not going to be easy. It never has. It never will be.

That’s why most people don’t succeed in what they do. But the people that take the time, do the research, have the focus, those are the individuals that are able to create something that matters. 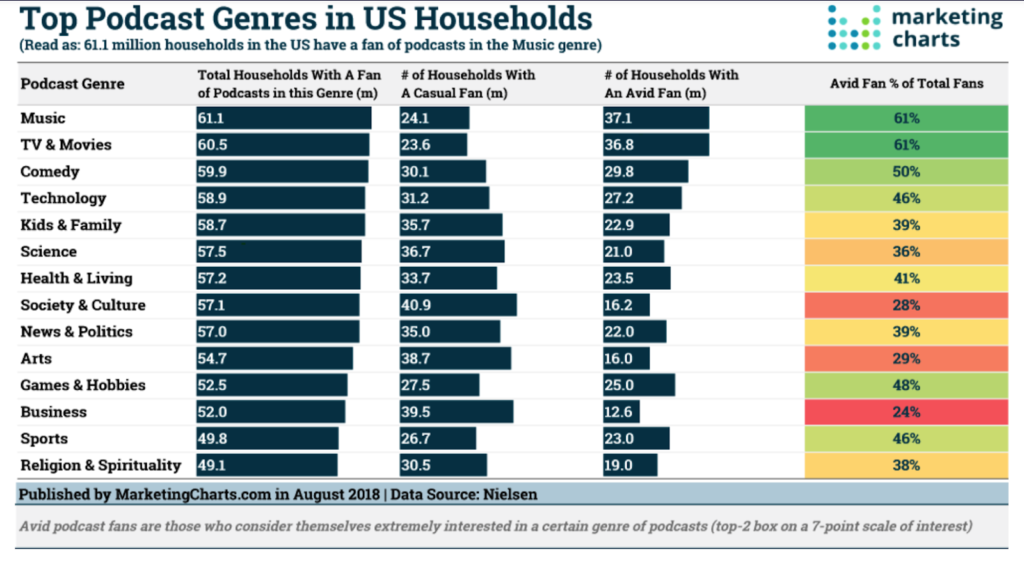 Why did Podcaster Paradise account for less and less of your income? Is podcasting saturated now? 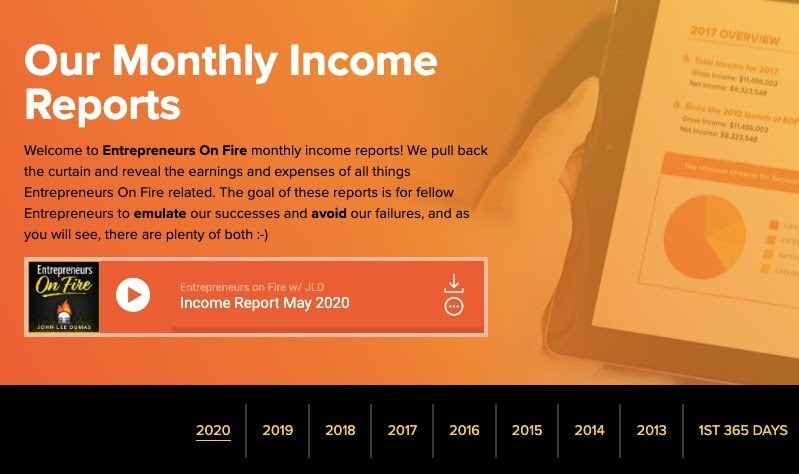 No. You know, it just became a smaller revenue generator for us over the years, you know, for a long time that was one of our only revenue sources and that’s why it was such a big percentage.

But then over the years, we’ve added up to nine revenue streams now. And Podcasters Paradise has just continued to take more of a backseat in the overall revenue that we have.

Now, we still are running Podcasters Paradise. It still is bringing in new members on a daily basis. And it still does make up a specific proportion of our overall revenue. And I am actually curious as to why it’s not being shown in the 2019 or maybe you said 2020 version of that cause it should be because as you look at any of our income reports, podcaster’s paradise is listed in every single income reports to the tune of, you know, anywhere between $20,000 to $35,000 every single month.

What is it that you’ve seen coming trends that you see with entrepreneurs and successful people that nobody’s seems to be talking about?

You know, I’m a big believer in just identifying specific themes and just sticking with them and not over complicating things. And that is the biggest theme because it’s true in podcasting and it’s true in entrepreneurship on a greater scale.

People need to focus on their niche. They need to identify a specific niche that is not being served or that is being underserved and they need to become best in show.

Like everybody just wants to copy person X, Y, or Z. that’s having success and making a lot of revenue and money in these different areas and they just become this fake watered-down version of those individuals.

10. What practical steps did you take to attract listeners in the beginning?

It was a slow and steady growth of our listenership. Nothing happened overnight. There was no overnight success. There was no hockey stick. It was focusing and doubling down on perfecting my craft, honing my skills, making the podcast episodes themselves better so that our current listeners would tell their friends, their families, their loved ones, they would share, they would be our evangelists.

Nothing worked better than making the podcast itself better.

So many people ask me, John, like, what’s the latest marketing strategy? Like should I spend money on ads? Should I do this or that? I’m like, probably none of those things because your podcast isn’t that good right now.

And until your podcast is good, there’s nothing you can do to make people listen, subscribe, keep listening, and tell their friends about it. And that’s how you’re going to win. So focus on making your content better, your podcast better. Hone your skills by actually putting in the reps doing that thing.

12. Do you have any expectations, features, or plans for your podcast in the next five or more years?

I have no idea what the future is five years from now, even three years from now. But I can tell you that the biggest focus and project that I’m personally working on in the business is my first traditionally published book.

I signed a deal with Harper Collins publishing and I’m very excited about it. And every single day, I am working diligently on my book project and it’s going to be launched in the spring of 2021.

John Lee Dumas is the host of Entrepreneurs on Fire, an award winning podcast where he interviews inspiring Entrepreneurs who are truly ON FIRE. With over 2500 episodes, 1 million + listens a month, and seven-figures of annual revenue, JLD is just getting started. Visit EOFire.com to set YOUR Entrepreneurial journey ON FIRE!

Nicholas Godwin is a technology researcher who tells profitable brand stories that tech buyers and businesses love. He covers technology topics on his website TechWriteResearcher.com, and has worked on projects for Fortune 500 companies, global tech corporations and top consulting firms, from Bloomberg Beta, Accenture, PwC, and Deloitte to HP, Shell, and AT&T.