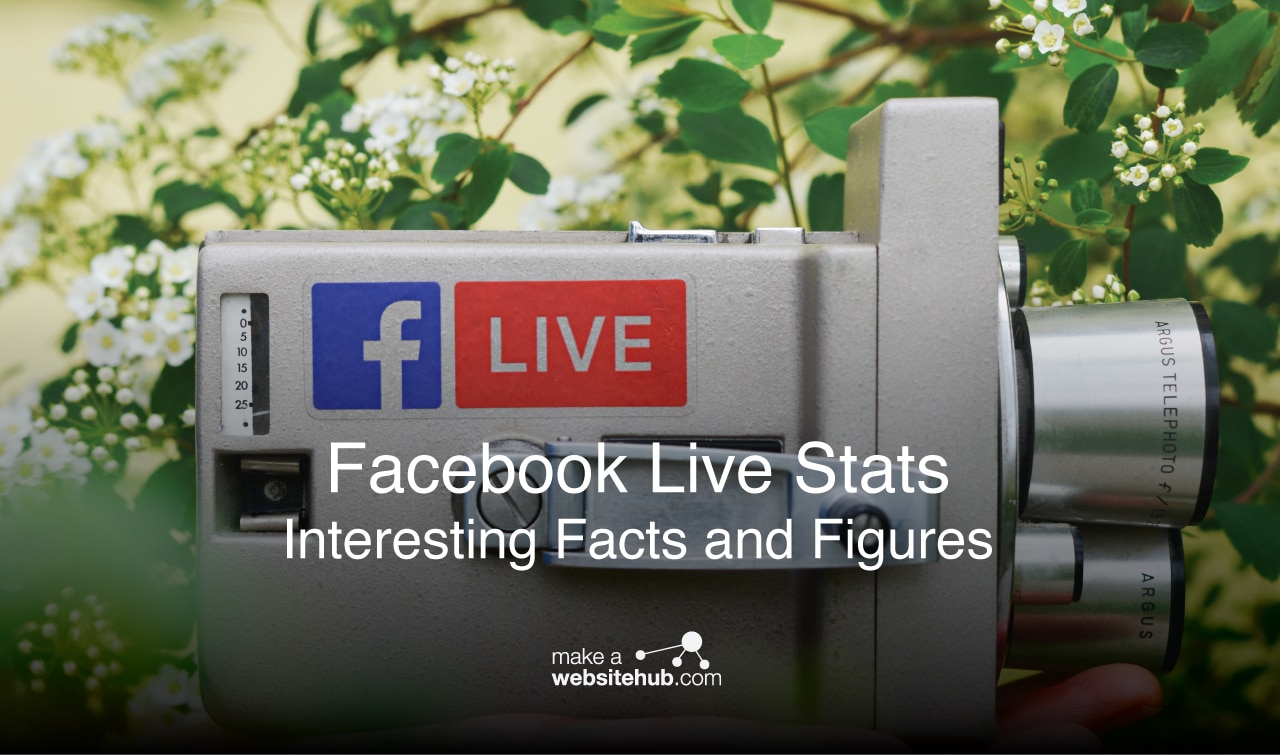 While Facebook has been a powerhouse in the social media world for well over a decade, it wasn’t until recently that the platform began offering live streaming services. Facebook Live is a relatively new feature of the platform, but it has become incredibly popular among users and marketing professionals alike.

Facebook’s popularity has made it a goldmine for digital marketers, online businesses and companies. The live streaming feature only further cemented that status. Here’s a selection of some important Facebook Live statistics you need to know.

1. Facebook Live was made available to the masses in 2016.
By the time Facebook Live was launched, the social media platform had a good decade of experience under its belt. Originally, the service was built as a competitor to big-name live-streaming platforms like Periscope.

At first, Facebook Live was only made available to verified public figures like celebrities and media moguls. This was back in August 2015. It wasn’t until nearly 6 months later that Facebook Live became publicly available to anyone, marking a huge change in the way members communicated.

2. In 2016, millions of hours of video were uploaded to Facebook every day.
Around the time that Facebook Live was launched, the platform had just under 2 billion users. Those are pretty impressive numbers, so it was no surprise that Facebook Live started off with a bang. By that point, traditional videos could be uploaded to the platform. Once live was put into the mix, members were watching roughly 100 million hours of video each and every day!

These filters could create live animations and special effects. Most of the effects would follow the broadcaster’s face, adding a new level of fun to streaming.

4. 20 percent of all videos uploaded to Facebook in 2017 were broadcast live.
Facebook users welcomed Live with open arms. Despite the platform’s existing video upload features, members began using Facebook Live in droves. In 2017, 1 out of every 5 videos viewed on the platform were live.

5. Social broadcasts with friends became a feature in 2017.
In May of 2017, Facebook launched a new invite option. This feature could allow broadcasters to invite friends into their stream. This helped to maximize the reach of live videos and let people broadcast together.

That figure is from a couple of years ago. There’s no doubt that the numbers have climbed even more. In the first few years after launch, the number of broadcasts doubled each year.

7. Waiting Rooms first launched in 2018.
With the rising popularity of the service, Facebook implemented some useful changes to make broadcasts more accessible. One of the most notable was the stream waiting rooms. It became available in October of 2018.

Before this feature came into play, streams were a bit unorganized and confusing. Now, broadcasters can create calendars, which produced notifications for subscribers. Viewers can then wait for streams to start in virtual waiting rooms.

8. Facebook paid millions to attract audiences.
Before Facebook Live became the powerhouse that it is, the company wanted to increase awareness as much as possible. So, millions of dollars were paid to celebrities and media companies to use it. In total, over 50 million dollars were spent. Some of the companies paid included CNN, Buzzfeed, and more.

Even social media influencers got in on the action. Facebook reached out to Vine superstars and YouTubers to bring their audience to the platform.

As we mentioned earlier, Facebook Live is a great place for companies and marketers to reach their target audience. Here are some interesting statistics around the advertising aspects of the service.

11. Facebook accounts for a large majority of all ad spending in the United States
Video advertising is a multi-billion dollar industry. In 2018, about 7.85 billion dollars were spent on digital media. How much of that went to Facebook? According to Facebook, roughly 6.81 billion dollars. That’s more than 84 percent of all video advertisement spending!

13. Nearly three-quarters of all marketers utilize Facebook Live.
According to surveys and statistical data from Facebook, around 70 percent of marketers use Facebook Live directly. Not only that, but more than half of those marketers increased their Live budget in the past year.

14. Almost a quarter of companies think that Facebook Live is successful.
Most marketers thought that videos on Facebook helped them connect with customers.
When asked whether or not Facebook Live helped customers understand brands better, roughly 97 percent of marketers stated that it did. With the simplicity of the platform and the ability to create engaging short-form content, it’s not hard to see why.

More than 75 percent of marketers also stated that Facebook Live helped to generate increased sales. A little less than half said that it even reduced the number of questions about their respective products or services.

Think about the impact that could be made if companies increased their live frequency!

17. Shortly after launch, most Facebook Live videos were broadcast outside of the United States.
In June of 2016, only a few months after the service was made public, most of the streams weren’t coming from the United States. The most videos streamed at that time came from Germany. Mercedes-Benz, the famed automotive company, took advantage of the service and broadcast almost 40 videos at the time.

18. Video-based content makes up about 11 percent of all posts.
When Facebook started, your only option was to create text-based posts. A lot has changed since then. Video content makes up approximately 11 percent of all posts created. This trails behind photos, which make up 12 percent. The most popular kinds of posts created on the platform contain links. They contribute to 77 percent.

So how much are simple text-based posts? Only 1 percent.

19. The average watch time in 2017 for Facebook Live was more than half an hour.
About a year after launching Facebook Live, the average view time for any kind of video content was 34.5 minutes per day. Roughly 4.3 percent of that view time went to live videos. This figure was from a few years ago, so there’s no doubt that the number has increased a bit since then.

21. Roughly 3,000 years of video are viewed every day on Facebook alone.
3,000 video hours were viewed daily in 2018 alone. This is a massive jump from 2016. Back then, only half a billion people were watching videos on the Facebook platform. Now, a majority of pages have some kind of video on them.

22. Some of the most popular Live videos exceed 10 minutes in length.
An analysis of 100 million videos on Facebook found that the most popular videos were between 15 and 20 minutes long. Engagement increased significantly after the within 15 minutes, making this the length that many marketers aim for.

Creating video content on Facebook is very flexible. You can upload traditional content or broadcast live. Broadcasts are automatically uploaded afterward for later viewing. Here are some statistics regarding the difference between live and non-live content.

25. People comment on Facebook Live videos more.
When it comes to comments, live videos get about 10 times more. This is thanks, in large part, to the ability to interact with creators in real-time.

26. Facebook users spend more time on live videos.
Live content is incredibly popular on Facebook. It’s so popular that users watch about three times as much of it as they do standard uploaded videos. While there are a lot of factors that contribute to this figure, it’s theorized that viewers are much more likely to stay until the end of a live stream. With normal uploaded videos, viewers can simply fast-forward to the action. That’s not possible with live content, ensuring that viewers stay tuned in for longer.

27. Facebook Live videos are shared less than traditional videos.
One statistic that traditional uploaded videos have over live videos is share count. The average share count for live content is a little over 11,000. For non-live videos, it’s about 54,000.

30. Live videos are not among the most popular posts in Facebook history.
A mere 0.74 of the top 10,000 most popular Facebook posts were live. Roughly 40 percent are traditional uploaded videos.

32. A vast majority of video content on Facebook is in the platform’s native format
While members can easily upload videos in a wide range of formats, roughly 92 percent of all videos on the platform use Facebook’s native format. This includes Live videos.

Facebook Live has managed to become a juggernaut in the live streaming industry in only a few short years. Most platforms take decades to amass the kinds of viewership numbers that Facebook has gotten. It’s changed the way that people share their lives and has proven to be quite beneficial to digital marketers and companies.

Thanks to the built-in audience that Facebook has, live videos are capable of reaching massive audiences. It’s already a platform that has over 2 billion users, so it’s a service that’s worth your interest.