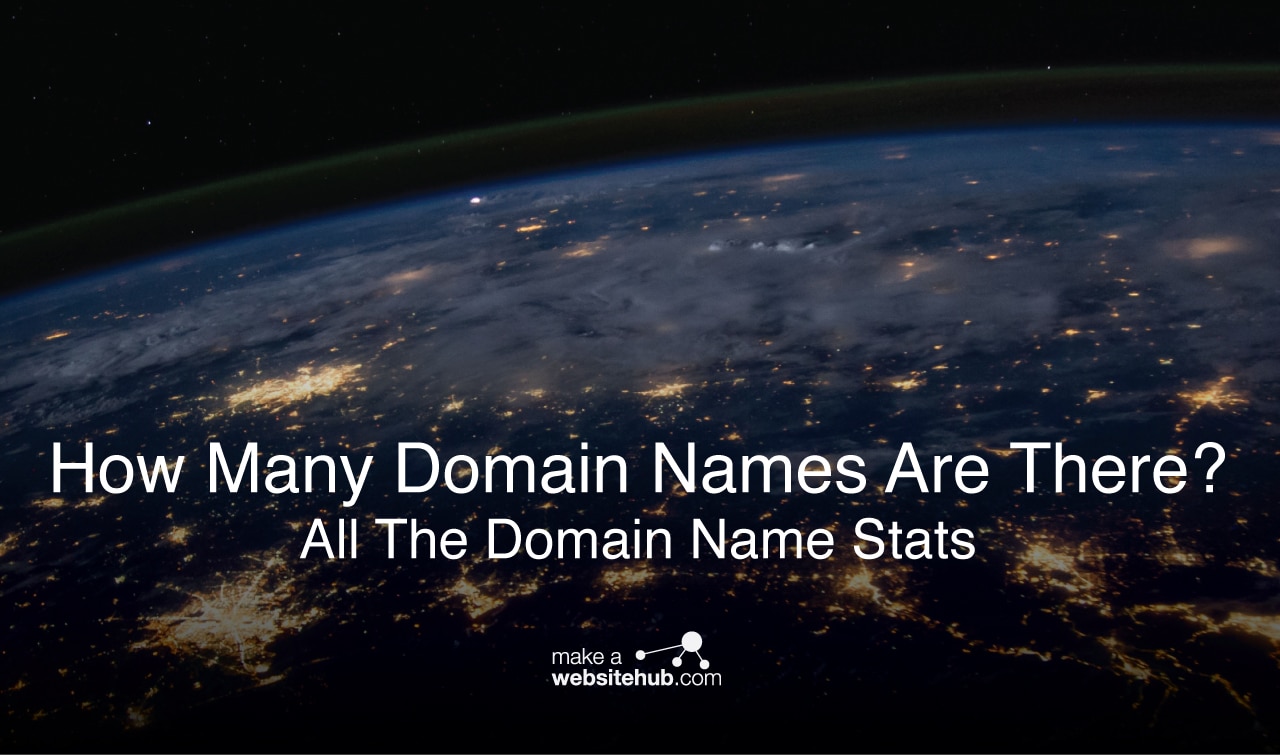 There are millions of websites floating around the Web, but if you’re wondering how many domains are there, Verisign is the go-to place for the latest domain name registration data. As the registry behind all .com and .net domains, Verisign releases a quarterly report with updated info on the current state of the internet.

Here’s a peak at its latest findings and domain name stats from Q3 2019, but first, let’s start with a little background info.

Where It All Started

The underlying infrastructure of the Internet was developed back in the 1960s and 70s. However, the Internet we all know and use today dates back to 1985 with the launching of the domain name system.

The first top-level domains, or TLDs, introduced include:

Interestingly, the term “Internet” wasn’t formally defined until 1995. As a testament to its ever-evolving nature, it continues to develop and grow in content, usage, and domain names.

In fact, even today, new country-code domain names, ccTLDs, are being added each year. We’ll dive into these in a minute, but let’s first work our way from the top down.

What are Top-Level Domains?

Commonly referred to as TLDs, top-level domains were first released by the Internet Assigned Numbers Authority, or IANA, in 1985 and represent the highest level in the hierarchy of the Domain Name System. Today, TLDs are better known as domain name extensions.

As noted above, they include:

• .com – Short for commercial, this was the first TLD released for common use. Despite being initially created for businesses and commercial organizations, it quickly became one of the most popular and widely used type of TLD or domain name extension for a variety of websites large and small.

• .net – Short for network, .net was developed for organizations involved with network technologies. However, like with .com, the use of .net wasn’t restricted to networking purposes as it was originally intended, allowing it to become a common option for any website owner.

• .edu – Short for education, .edu was developed specifically for colleges, universities, and other educational institutions. Although it was created for educational centers throughout the world, it is now only associated with those located in the US. Schools in non-US countries often use the .edu TLD extension as well as a country-code domain.

• .org – Short for organization, .org was developed strictly for non-profit organizations. In a similar vein, however, the restrictions weren’t enforced, making .org a popular domain extension for non-profits, for-profits, communities, and schools.

• .mil – Short for military, .mil was developed exclusively for branches of the US military. Unlike the other TLDs above, this restriction has been strictly upheld to today.

What are Country Code Top-Level Domains?

Country code top-level domains, or ccTLDs, are used to distinguish countries from one another. Some of the most popular ccTLDs include .uk and .au, which represent the UK and Australia, respectively.

When first created, only residents of a country could register a ccTLD for that country. However, some countries have been known to let non-residents register domains using their ccTLD.

How Many Domain Names are There in All?

#1 – Domain.com – Use coupon code Sitehub to get 25% off domains and hosting

How Many .com Domains are There?

If you’re wondering how many domains are there, chances are you’re talking about .com and .net domains. After all, they’re the most popular.

How Many Domain Extensions are There?

As mentioned, top-level domains, or TLDs, are also commonly called domain extensions. Some of the most common domain extensions are listed above: .com, .net, .org. .edu, .gov, and .mil. However, as of the end of 2019, there are a whopping 1,517 different domain extensions or TLDs out there to choose from.

Unlike domain names, which are constantly being added and erased, this figure doesn’t change as dramatically. Nonetheless, it does change from time to time as old ones are retired and new ones are delegated.

It’s a big list. In fact, it’s too long to list, but if you’re interested in seeing all of the different domain extensions available, there are several resources where you can check them out. Wikipedia even has a lengthy page listing them all.

How Many New Domain Names are There?

As far as .com and .net domain regstrations go, there were nearly 10 million at the close of Q3 2019. A year prior, there were 9.5 million new .com and .net registrations, so these increased by about 500,000 year-over-year.

While these figures are certainly impressive, in the larger picture, they only make up approximately three percent of all current domain name registrations. That said, new domains are always in the process of being registered, so the real figures are almost impossible to determine.

How Many ccTLDs are There?

Short for country-code TLDs, ccTLDs make up nearly half of all current registered domain names. In fact, there were 161.8 million of them registered at the end of Q3 2019, marking an increase of 3.1 million, or two percent, over the previous quarter.

Year-over-year, country-code domain name registrations increased by 12.5 million, or 8.4 percent. Needless to say, for brands outside the US, geo-targeting with ccTLDs seems to be the way to go.

The top 10 ccTLDs at the end of the third quarter were:

Although there are hundreds of other ccTLDS, these top 10 make up over 66 percent of all current ccTLD domain name registrations.

Not surprisingly, .com is the most common TLD with the greatest number of registrations. The .net and .org TLDs rank 5th and 7th respectively. The rest of the list is primarily made up of ccTLDs.

On a side note, the new domain extension .xyz has started picking up steam as well. At the time of publication, it has over 7 million domain name registrations, and like the others it’s growing each day.

Where Did All of These Domain Extensions (TLDs) Come From?

ICANN, the Internet Corporation for Assigned Names and Numbers, has been coordinating the Internet’s domains since 1998. Since it launched the gTLD program in 2011, the Internet Domain namespace has expanded even further, allowing companies and organizations like Google or BMW to operate their own domain extensions.

As you can imagine, the application process for a company or organization to be granted their own domain extension is rigorous. In all, 1930 applications for new top-level domains were submitted, but not all were approved. Nonetheless, the ones that were, certainly added to the lot.

That said, not all domain extensions can be registered by the public. Some domain extensions, such as .bank and .law, have specific registration requirements. Some of these newer brand-related TLDs, such as .Google and .Microsoft, can also only be used by the brands themselves.

Is There an End in Sight?

Well, not really. In fact, since the Internet continues to grow, there are even talks of having another round of new domain extension applications.

Now that you know the latest in the sheer number of different domains and domain name extensions out there, here’s a look at the top .com and .net trending keywords to give you a better idea of what’s hot and what’s not on the World Wide Web today.

By now, you know all of the latest domain data and how many domains are there going into 2020. However, another great nugget of information was the reported increase in the number of redirects being used, especially redirects to third-party sites like Amazon, Etsy, Twitter, and LinkedIn.

Well, there you have it. However, it’s only fitting to end an article about domains with a domain, don’t you think?

So, if you’re interested in learning more about domains and reading the latest report yourself, feel free to check out Verisign’s website at Verisign.com.

Where to buy cheap domains