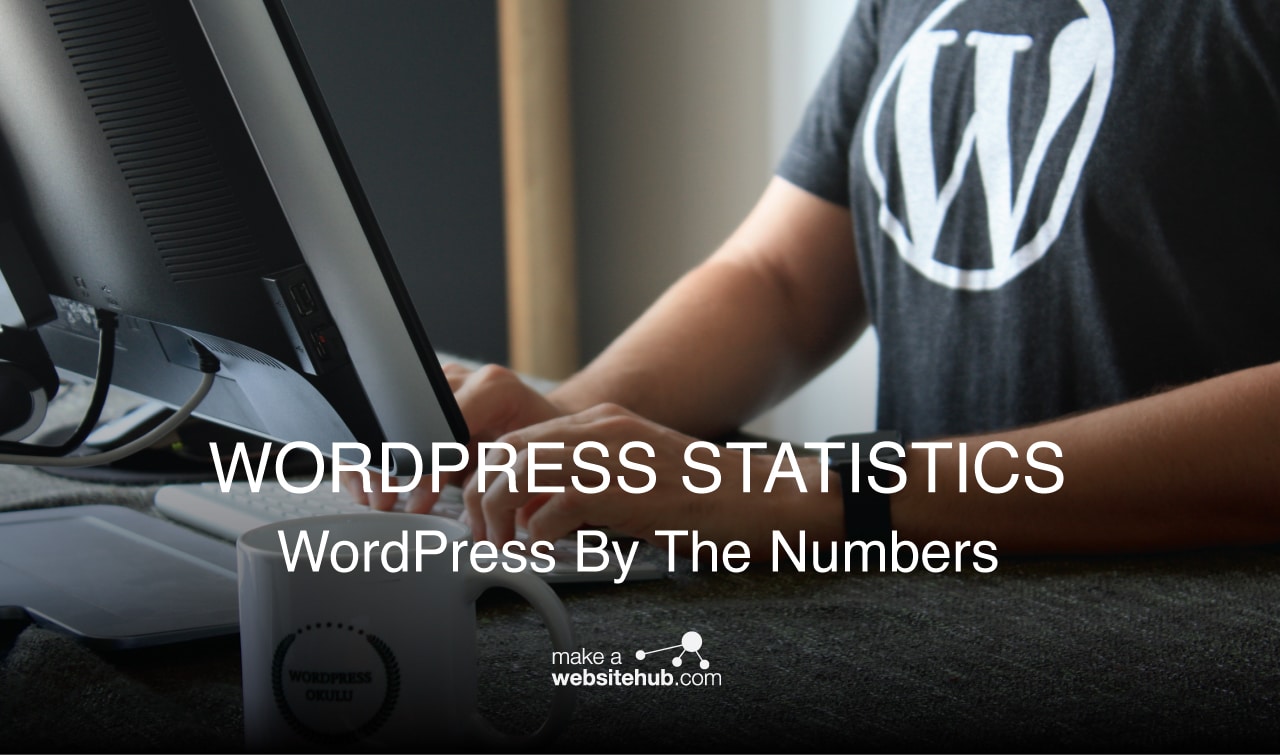 WordPress is hands down the world’s most popular content management system and number one blogging platform for starting a blog with. However, some outliers love questioning the masses and need a little convincing to jump on the WordPress bandwagon.

We’re not here to make you jump. We just want to open some eyes to the far-reaching powers of this almighty CMS.

Here, we’ve put together an extensive list of impressive and interesting WordPress stats to hopefully help you appreciate how popular and influential this CMS actually is.

It’s hard to argue with raw data. Sure, it’s open to interpretation, but the numbers never lie and always tell the truest story. So, that’s why we made this helpful stat-happy resource.

Whether you’re working on an infographic or hoping to convince a stubborn new client to dump their outdated CMS for something more modern and flexible, these interesting WordPress stats are sure to help.

3. In January 2003, Matt Mullenweg took over the platform and began work on WordPress.

6. Pages and themes were introduced with the release of WordPress 1.5 in February 2005.

7. The first annual WordCamp took place in San Francisco in August 2006, and there have been 577 WordCamps since.

8. The first international WordCamp was held in Beijing in September 2007.

13. With nearly 60 percent of the global market, WordPress became the world’s most popular CMS in 2013.

14. Today, WordPress is responsible for powering over 35 percent of all blogs and websites on the Web.

15. Approximately 22 percent of new domain names in the US are run on WordPress.

17. 22 billion WordPress pages are viewed by over 410 million people each month.

18. Every six months, more than one million new WordPress domains are registered.

19. The keyword “WordPress” is searched for 37 million times each month.

20. With over 130 million unique monthly visitors, more people visit WordPress than Twitter, which receives around 114 million visitors a month.

21. WordPress is available in 62 different languages.

22. WordPress 4.5, the latest version, has been downloaded over 20 million times.

26. 500+ new websites are built using WordPress each and every day.

28. According to Technorati, WordPress is used to manage 10 percent of the world’s top 100 blogs.

32. In the US, 22 percent of all new domain names are powered by WordPress, and WordPress is preferred by over 50 percent of CMS users.

34. Since the platform’s inception, 36 versions of WordPress have been released.

35. On average, a new version of WordPress is released every 150 days.

36. Plugins and localization were introduced in Version 1.2.

39. Over 20 percent of all WordPress code is comprised of comments.

41. Less than 1/4 of all WordPress websites are running on the latest version.

43. Despite being recently released, WordPress 5.2 has already been downloaded 37 million times.

46. To date, there have been more than 1.25 billion WordPress plugin downloads.

47. WordPress users have downloaded over one billion plugins from WordPress.org alone.

48. There are now more than 50,000 plugins in the official WordPress directory, and new ones are added each day.

49. With over 82 million downloads, Akismet is the all-time most popular plugin.

50. With over 53 million downloads, Jetpack is the second most popular plugin.

51. WordPress’s WooCommerce plugin has been downloaded over 30 million times and is used to run 28 percent of all online stores.

53. 19 plugins have managed to reach the one million download mark. They include all of the plugins above plus W3 Total Cache, Contact Form 7, CAPTCHA, Hello Dolly, Regenerate Thumbnails, WP-PageNavi, TinyMCE Advancd, and Advanced Custom Fields.

54. CodeCanyon is home to over 6,000 premium WordPress plugins. Some of its best sellers include LayerSlider, Slider Revolution, Visual Composer, and UberMenu.

55. 80 percent of searches on CodeCanyon are for forms, calendars, sliders, and other functionality-focused plugins.

56. The average cost of a premium WordPress theme is $40.

57. Only 40 percent of the most popular free themes are made by third-party developers not associated with Automattic or WordPress.org.

58. The four most popular free themes are Sydney, Hestia, Mesmerize, and OceanWP.

59. With 17 percent of the total market share, the most popular overall themes are Avada, Genesis, and Divi. All three are paid themes.

62. 93 percent of ThemeForest sales are for responsive themes.

63. Nearly 75 percent of searches on ThemeForest focus on niche themes.

64. The most downloaded WordPress theme of all time is Avada, generating over $12 million in sales!

64. Out of every CMS, WordPress is the most hacked. In a study of 8,000 infected sites, 74 percent were made with WordPress.

65. 61 percent of all infected WordPress websites feature an out-of-date version.

66. A weak password is responsible for 8 percent of hacked WordPress sites.

67. Over 30 percent of the top one million websites on Alexa run an outdated WordPress version (version 3.6), which is vulnerable to attacks.

68. According to Wordfence, which is a popular WordPress plugin, WordPress experiences 90,000 attacks every single minute.

69. 52 percent of WordPress security vulnerabilities are caused by plugins.

70. The top three most hacked plugins are TimThumb, Gravity Forms, and Revslider.

71. Over 4,000 WordPress sites were infected with malware originating from a fake SEO plugin in 2017.

80. Combined, there are 147 million new posts and comments added monthly.

82. Over 35 million files and 12 million pages are added to WordPress websites each month.

83. 71 percent of WordPress sites are written in English.

84. The next most popular WordPress language is Spanish, with 5.1 percent of sites displaying Spanish-written content.

87. Despite receiving the same approximate number of unique monthly visitors as WordPress, Facebook employs 25 times as many workers. Amazon, on the other hand, employs 500 times more people.

91. 25 percent of WordPress users make their living from their WordPress sites. Over 90 percent of users develop more than one website.

93. WordPress WordCamps take place on six continents and in 75 cities in 65 countries.

94. Currently, there are over 1,000 WordCamps organized across the globe.

96. There are over 1,500 WordPress meetup groups around the world.

99. WordPress was once caught being used to guide missiles. Yes, you read that right. It may be a bit alarming, but apparently WordPress can do a lot more than crush internet stats!